Pellegrini Wine Company used to clean barrels with a pressure washer followed by ozone. That changed in 2016, as California was emerging from a five-year drought that had impacted agricultural access to water, depleted groundwater and damaged the environment. Pellegrini winemakers wanted to clean in a more water-conscious way. That meant stepping away from using the high water consumption needs of ozone, which can also adversely affect winery workers and the environment.

“You have to use so much ozone to overcome the heat that deactivates ozone after pressure washing with hot water,” says Charlie Fauroat, Pellegrini’s Winemaker and Assistant General Manager. “The wine industry uses so much water that anywhere we cut back has a major impact. We started by switching to a hose-driven head then steam, followed by a pressure wash. That uses less water, puts less stress on our pressure washers, as well as pressure rinsing heads, and keeps ozone out of the winery.”

“Steamers use very little water and sanitize without chemicals,” says Sean Ring, VP of NorthBay Equipment. “For example, the Optima Steamer uses significantly less water than other barrel cleaning methods―only 0.08-0.32 GPM vs. 4-11 GPM―saving wineries hundreds or thousands of gallons of water. That’s a critical benefit, given that California water usage restrictions are here to stay.” 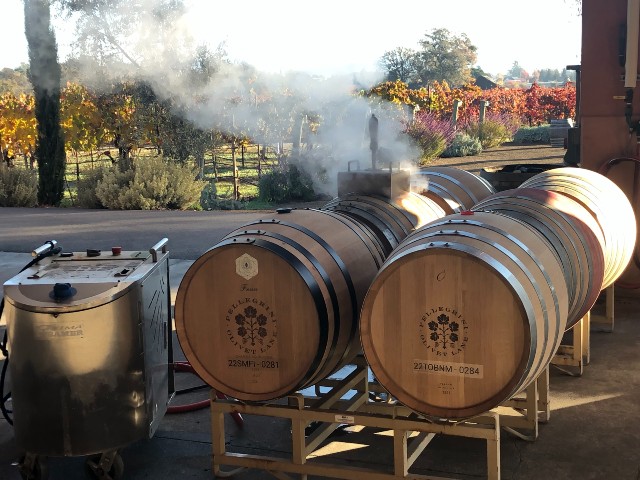 Steam Is a Better Clean

A 2019 Lebrun Labs study found that dry steam reaches temperatures lethal to pathogens that spoil wine, like Brettanomyces (Brett) and Zygosaccharomyces, in just a few moments, compared to the 30 or more minutes needed when pressure washing. Steam also fills barrels faster than water, saving time and eliminating chemical residues in the wine.

Steamericas’ Optima Steamer uses only a half-gallon of water to rehydrate and sanitize a barrel, eliminating wastewater and chemicals and allowing wineries to comply with the Clean Water Act. Steam also penetrates up to 8-9 mm into barrel staves, making it more effective than traditional cleaning methods at removing Brett, which can grow into the wood as deep as 5 mm.

“It’s a better clean,” says Fauroat. “Honestly, the first time you steam a barrel and then pull that vacuum, dump it out and see what comes out, it’s earth shattering. You think, ‘and that was going to be my wine?’ It’s important to steam clean the day you empty a barrel, but it’s even more important to do it the day you fill a barrel. You’re just shooting yourself in the foot by putting your freshly pressed reds into sulfury barrels because you have a bad barrel prep program. Using steam is an easy decision. It’s a better clean and easier on the environment.” 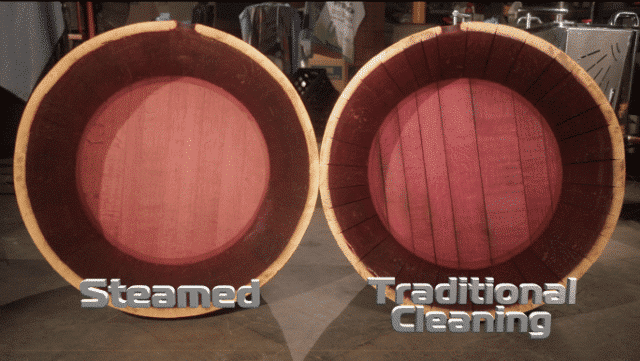 Worker safety is always critical for wineries, and the Optima Steamer’s Barrel Wand Tool helps protect them. The wand rests atop the wine barrel in a stainless-steel base that directs the steam away from a worker’s face. The easy-to-use shutoff valve lets users move the Barrel Wand between barrels without the steam billowing back into their faces.

“Safety and ease of training are two other main concerns,” says Fauroat. “We share our facility with another winery, and they have another brand’s steamer, so I get to see them both in action. The other steamer is stainless and has exposed copper pipes, both of which get very hot and are easy to touch by mistake. The Optima Steamer is entirely cased, which is so much safer. Another thing is the flow valve. With the Optima, you open it fully every time you release the steam. For every other steamer I’ve seen, you have to crack it open no more than 30% or decimate the pressure. I have to train people and mark the 30% point with a sharpie to remind them. That’s what I love about the Optima Steamer! It’s foolproof because it operates fully open. That means I can send any worker, even help from the vineyard, off on their own with a very short training and know they’re not going to hurt anything, including themselves. That’s an extra 15 minutes I can use somewhere else.”

Another time saver is that employees can set up the Optima Steamer and work elsewhere while the steamer is cleaning. The Optima also has a thermometer that reads the barrel’s internal temperature, so a user will know if the steamer isn’t reaching the desired temperature.

If you’re a Winemaker looking for a safe, efficient and eco-conscious solution for cleaning barrels, reach out to NorthBay Equipment to discuss your needs and let them analyze and recommend the best options. For many, that will be the Optima SEII Steamer.

NorthBay Equipment and Steamericas will be at the WIN Expo on December 1, 2022 at the Sonoma County Fairgrounds. Stop by at booth #453 to see the Optima Steamer in person.